Home
Winning film will be screened in Cannes

In its mission to provide a platform for the development Central American and Caribbean film projects, IFF Panama’s Primera Mirada grants aid for the international-market visibility and completion of feature film projects currently in post-production.

Julio Hernández Cordón, director of I Promise You Anarchy and winner of Primera Mirada 2015 – a now-completed film to be screened this year at IFF Panama

Thanks to a private donation, Primera Mirada counts with $15,000 that will be destined to aid in post-production completion. Thanks to the IFF Panama-Cannes Film Festival alliance, the finished film will be screened at "Le Marché du Film" in Cannes - one of the world’s most important film markets. Winner will also receive Cannes Film Festival accreditation with paid travel and accommodation.

In addition, Boogieman Media will design the film’s official poster. This creative team has designed many acclaimed films’ posters including The Clan, Wild Tales, and Aire Libre. Boogieman Media will also hold private meetings with each of the five chosen teams; providing guidance and advice on their films’ graphic marketing imagery. This consultancy will be led by Leandro Mark, director of Caídos del mapa, and Max Saad.

In addition to financial aid to the winner, all selected projects will be screened in private sessions exclusively for industry representatives including sales agents, distributors, and delegates of other film festivals – this enables the projects’ directors and producers to connect with, answer questions, and receive candid feedback from members of the international film industry.

The international jury is responsible for choosing the winner of the industry works-in-progress section Primera Mirada, is composed of specialists in Latin American cinema who share IFF Panama’s mission to support the growing film industry across the region. As such, we will include jury members like Ivan Giroud, Director of the Festival de Cine de la Habana (and uncle of Pavel Giroud, who is participating in IFF Panama with his film El acompañante); Canadian Jaie Laplante, director of the Miami Film Festival; and Yissel Ibarra, of the Instituto Mexicano de Cinematografía (IMCINE).

Primera Mirada’s second edition received 46 film submissions of which only 5 were selected to participate in the competition:

Synopsis: Verónica is a transgender woman who works as a prostitute in the streets of San José (Costa Rica). While driving in a vehicle with some clients, they hit a young and enigmatic man named Tato. In an impulse of solidarity, Verónica decides to take Tato to her apartment, where she offers him food and shelter. The next day, surprised and confused by the motives of his host, Tato prepares an escape. The understanding, solidarity and tension that initially arises between Verónica and Tato is hindered by Verónica’s friends. The intertwined destinies in Hold Me Like Before,  reveal the search for a distant and happy idea called family. 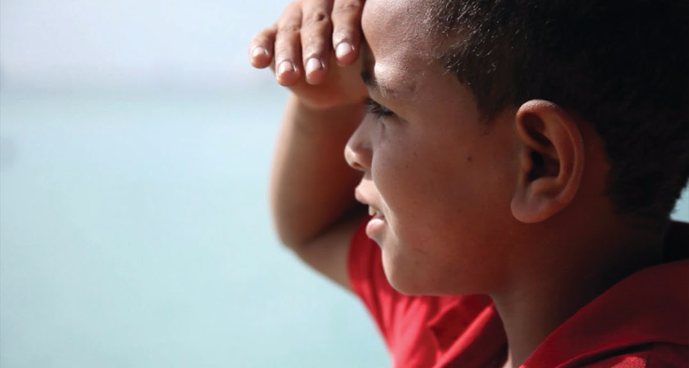 Synopsis: Despite his difficult circumstances and job wiping windshields for a living, 12 year-old Dominican boy Jeffrey, dreams of being a Reggaeton singer. This dream helps him escape the hard reality of a life full of adult- like responsibility. His eighteen year-old brother, Jeyson, shares this dream, and the two brothers compose songs that reflect their life, their neighborhood and society as they perceive it. Through Jeffrey, we discover their daily routine, their disjointed family and their reggaeton dancing beat.

Synopsis: Set in the rich landscape of Trinidad’s Carnival Season, Gregory, a young black working-class eighteen-year-old stars in a local play where he is noticed by James Young, an older affluent businessman.  James feels immediately attracted to Gregory and pursues him. On Carnival Monday the young men cover their bodies in blue paint and dressed as devils, descend down into the valley, howling and drumming, lost in the carnal dance.  That night a fateful confrontation erupts, changing their lives forever.

Synopsis: Many Dominican women dream of getting to Europe, as is the case of Noeli and her mother. Noeli is an actress and she’s hired to shoot a film in Venice, while her mom is a housekeeper in Spain. They haven’t seen each other in 10 years. After the shooting is over Noeli visits her mother. Nostalgia and the deep desire to return to the island are palpable.

Synopsis: Ten years after the brief but brutal US military invasion of Panama, three estranged survivors are uncomfortably nudged towards an intimate reconciliation by the person they lost that gruesome night.